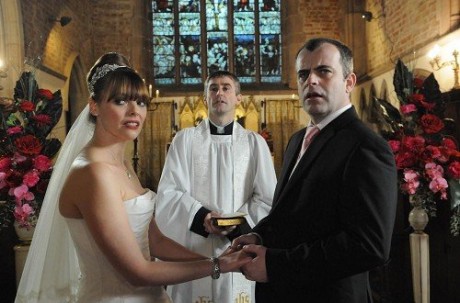 Weddings: a time for happiness, love, excitement…and public displays of oral? This week in Salt Lake City a man was caught allegedly going down on his lady while two people were tying the knot. Just to get specific, the police said the man was caught with “his tongue and fingers inside of [the woman’s] vagina.”

Once spotted, oral offenders Sandra Kruser and Wilson Benally distressed one guest enough to “[run] into the road to stop” a police officer that happened to pass by. This is where Officer Rich Stone was pulled into the mix. Officer Stone approached the couple only to “physically [see] the sex act.” I’d say that’s grounds for assault of an officer.

To make matters worse, when officer Stone told the couple to cease the sex act, they flat out refused. Stone had to physically pull them apart. To push this story even further, at least four children from the wedding saw the sex act take place.

The two were ultimately arrested for gross lewdness and public intoxication. Benally was also charged with criminal trespass. Both are currently held on bond.

More Than Yes: The Ins & Outs of Affirmative Consent

SEX IN THE NEWS: OCTOBER EDITION

It Could Be Worse: The Wildest Sex Fails